The Problem with Public Transport

I caught the train out to Geelong a couple of days ago (a small, cityish area about an hour out of Melbourne).  Geelong is well known for it's beach and its AFL team and lesser known for its Wool Museum.  Seriously.  There's a Wool Museum.  I'd tell you what's in there but they charge entry to that thing, so I went to the beach after checking out the gift shop.

The train ride was dominated, not by Wool Museum patrons, but by hardcore Geelong Cats supporters on their way home from the G or Etihad or wherever the game was.  The carriage was so crowded I barely got a seat.

I'm very glad I did get a seat though, because as a person with POTS (a symptom of ME/CFS), standing for an entire hour on a moving train would have been a special kind of hell.

Before anyone starts asking if saucepans or kettles are also listed amongst the symptoms of ME/CFS, I should explain that POTS stands for Postural Orthostatic Tachycardia Syndrome.  When people with POTS stand still or sit upright, blood pools in our legs rather than circulating to our organs. The heart then speeds up in an effort to keep everything functioning with the low volume it now has to work with.

Some people faint when this happens.  I don't.  Apparently my fainting threshold is high.  Instead of keeling over I just get headachy, dizzy and nauseous as my heart rate rises to stupid levels.  It's my body's way of telling me that I need to lie down now, and it's pretty unpleasant.  The feeling can generally be avoided by sitting with my feet elevated and lying down when the signs tell me to do so.  The longer I stay vertical the longer I need to spend horizontal later on.

If the train to Geelong had had no seats ... I'd have stayed in Melbourne rather than risk the journey.

But there was a seat.  The last seat as it turned out.  Everyone who got on the train after me spent a few minutes wandering up and down the slim isle before settling on finding somewhere to lean.  My favourite of these was an old Essendon supporter who chucked his bag next to mine and proceeded to cheerfully chat footy with friends and strangers alike whilst standing in the middle of the train.

Unfortunately, this was where it got a bit unpleasant for me, because as the youngest looking adult in the general vicinity, I was getting looks from the people around me; it's bad form to leave the old guy standing if you're sitting whilst under thirty. 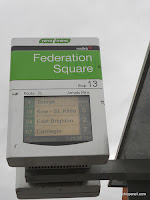 It's not the same in every city, but in Melbourne there is very definite public transport protocol.  Generally it's first in best dressed when it comes to seats, but if old age pensioners, people with visible disabilities or pregnant women board, the closest young person should offer their seat.  Those who don't stand are to be given the evil eye.

I once had to wear a cast for a month after getting hairline fracture on my wrist and was pleasantly surprised at how much easier navigating public transport became.  I didn't particularly need to be seated as this was pre-ME/CFS and it's not hard to stay standing with a fractured wrist, but the courtesy was appreciated.

Funnily enough, now that my need to be seated is more intense than that of many pensioners and pregnant women, no one ever offers anything.

I have a few options when faced with crowded carriages:


I sit on tram floors a lot.  It's a great way to be accidentally kicked or hit in the head with peoples' bags.  It's also a great way to get your clothes dirty at the beginning of the day.

One time, when I had a seat, a pregnant lady got on the tram.  No one got up immediately so the forty-something woman sitting next to me gave me a dirty look, nudged my arm and said "Up!  Get up!"

I didn't have the energy to argue so I reluctantly stood.  As there was no floor space, I remained standing.  By the time we reached my stop I was gripping the closest pole with both hands for support, leaning against the cool metal to ease the pounding in my head.  I was also breathing pretty hard to keep the nausea at bay.  Basically, I looked like crap.  Not crap enough to encourage anyone else to give up their seat though.  For that you need a cast on your arm. 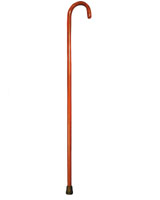 I know people with chronic illness or pain who carry unneeded walking sticks so they don't have to deal with this sort of situation.  It's not a road I've been willing to go down yet, but it certainly has its appeal.

I had no walking stick or cast when travelling to Geelong so I got the obligatory death glares from the people around me.  Not from the old Essendon supporter though.  He didn't mind.  I know this because when it became clear that I really wasn't going to give up my seat, a young mother across the isle offered hers (young mothers are exempt from the standing rule if there is another young person on the carriage, but are obligated to stand before the over forty crowd).  The guy laughed, all good natured and cried "I might look old, but I'm not decrepit yet!"  He waved the woman back to her seat and remained standing all the way to Geelong.

I kind of loved him.
Posted by Gnomes Chainey at 2:02 AM

Gnomes Chainey
Skeptical, twenty-something, determinist with ME/CFS and a pretty cat that bites.